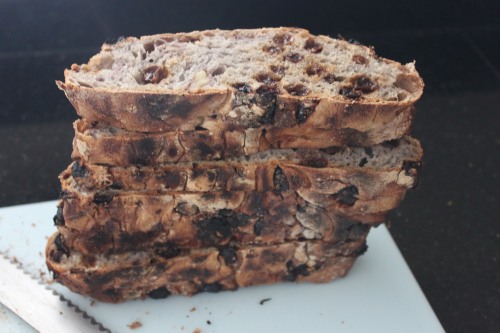 Back in November 2006, the foodie world was taken by storm when Mark Bittman published Jim Lahey’s recipe for No-Knead Bread in the New York Times.  Back in November 2006, I was a second-year law student, living in a dorm where the communal kitchen was conducive to making simple spaghetti, at most.  I vaguely recall trying to make pumpkin bread from a Williams Sonoma mix once, and even that was only semi-successful. 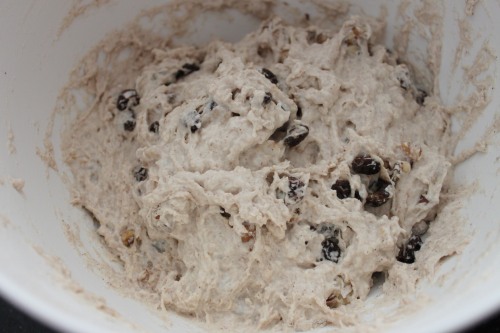 So I completely missed the boat on no-knead bread, but in recent months I’ve been making up for lost time.  The original version, which I’ll share at some point, is nothing short of life-changing.  I would marry it if unions with food were legal.  We’d have a simple wedding at city hall and move into a small but cozy starter home.  I’d work long hours at a thankless job in order to put food on the table and the bread would develop an alcohol problem.  Depressing country songs would make up the soundtrack of our life. 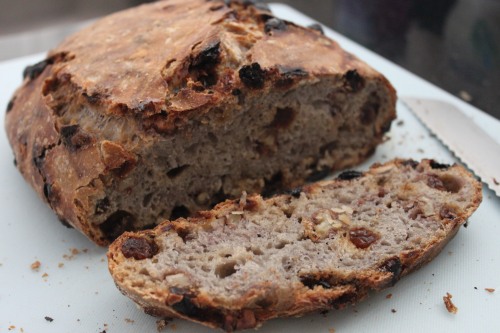 The fabric of our marriage would be stretched to its limits and I’d seek comfort in this raisin walnut no-knead bread.  It reminds me of the original bread, except it’s sweet and understanding  and offers me a shoulder to cry on.  I leave a note on the kitchen table one night when the original bread is out at the bar with the boys, saying that I just can’t take it anymore and I’m leaving.  The original bread comes back to an empty house and throws a beer bottle against the wall in a fit of rage.  But it doesn’t matter because the raisin walnut bread and I have run off into the sunset together and we live happily ever after…until I pick out all the gooey raisins because they’re just so damn irresistable.  Whoops.

3 cups bread flour (I used all-purpose), plus additional for dusting

In a medium bowl, mix together flour, raisins, walnuts, salt, pepper, cinnamon, and yeast.  Add water and, using a wooden spoon or your hand, mix until dough is wet and sticky, about 30 seconds.  Cover bowl and let sit at room temperature until dough is more than doubled in size and surface is dotted with bubbles, about 12-18 hours.  (Try to aim towards 18 hours if possible, as this will give the flavors more time to develop.)

After the first rise, generously dust a work surface with flour.  Use a rubber spatula to scrape the dough out of the bowl in one piece.  Using lightly floured hands, lift edges of dough in towards the center, shaping it to make it round.

Generously dust a tea towel (do not use a terry-cloth towel) with flour.  Place dough on towel and dust top of dough with more flour.  Fold the ends of the towel loosely over the dough, covering it completely, and place it in a warm, draft-free spot to rise for 1-2 hours, until dough is almost doubled.  At this point, if you gently poke the dough with your finger, it should hold the impression; if it springs back, let it rise some more.

Half an hour before the end of the second rise, center a rack in the lower third of the oven and preheat to 475 degrees F.  Place a covered 4 1/2 to 5 1/2-quart heavy pot with lid (Dutch ovens are perfect for this) in the center of the rack.

After half an hour, use pot holders to carefully remove the heated pot from the oven.  Uncover.  Unfold tea towel and quickly invert dough into the pot.  Cover the pot and bake for 30 minutes, then remove lid and continue baking until crust of bread is a deep chestnut color, about 15-30 minutes more.  Watch the bread carefully at this stage to make sure you don’t burn it.

Use a heatproof spatula to gently lift bread out of the pot (I usually grasp the pot with potholders and carefully dump the bread out onto a cutting board).  Let bread cool thoroughly before slicing.